A 12 yr old girl came to our OPD with history of swallowing a Pin (Tachni) used for fixing hijab. It was supposedly 2 inches long and one end had a pearl while the other end was pointed. She had kept it in the mouth while adjusting the hijab and with the pin in mouth , tried to speak and accidentally swallowed it. She had a bout of cough, and considering the seriousness, was taken to a doctor and an Xray was advised. The x ray showed the pin lying obliquely in the chest, suggesting the pin to be in trachea (airway).

“This is an extremely dangerous position, specially with a pointed edge, with a pin prick puncture of airway/lung leading to air leak and danger to the life. Removal was necessary and urgent, as with bouts of cough the needle point could move and puncture some vital organ”, informed Dr Jitendra Hazarey.

After explaining the risks, a rigid ventilating bronchoscope was used under general anesthesia, and the pin located. It was lying in the trachea with the pearl distal and the pointed tip pointing upwards, complicating the extraction.

Mal-aligned withdrawl could lead to a tear in the airway by the sharp tip. An optical forcep was used to disimpact and then the tip was grasped to protect the airway. It was carefully withdrawn in the sheath of the scope as a protective cover, and the whole assembly removed. “With Gods grace, exceptionally critical Anaesthesia (Dr. Bhau Rajurkar), backup of flexible bronchoscopist, Dr Shilpa Hazare and good equipment back up , the procedure was completed safely” Dr Hazarey mentioned.

With the help of an excellent team of Paediatric / adult Rigid Scopy – Dr Jitendra Hazarey , Pediatric Flexible bronchoscopy – Dr Shilpa Hazare , and Adult Bronchoscopy – Dr R Swarnakar , and all backed by Dr Bhau Rajurkar, Chief Anaesthesiologist and OT sisters and technicians , to tackle different and unforeseen problems which need improvisations and use of variety of equipments , which enables them to tackle different and varied types of Foreign bodies in children , safely.

Dr Jitendra Hazarey said, “As is said frequently, Prevention is better than cure, awareness amongst parents can help reduce the incidence of this dreaded and life threatening condition.”

Giving nuts, (peanut <Chana-gram , cashew- kaju, almonds- badam , bettlenut – supari ,and fruits with seeds ( SITAFAL) to young children who do not have molars , chewing teeth , leads to these children swallowing these things rather than chewing, and accidentally the fragment enters the airway (thaska lagne) , and can lead to severe respiratory distress and many times death due to airway obstruction , if not treated in time.

“Our elders have always warned us against talking with food in our mouth, as a bad habit in all probability knowing that this predisposes to aspiration of food in airway. Keeping pen caps, coins, supari etc in mouth should be discouraged as accidentally person may be called and he/she responds instinctively and accidentally aspirates it” Dr Hazarey informs.

Trying to remove a suspected foreign body in mouth by putting a finger inside is more likely to push it in and is a strict NO NO. 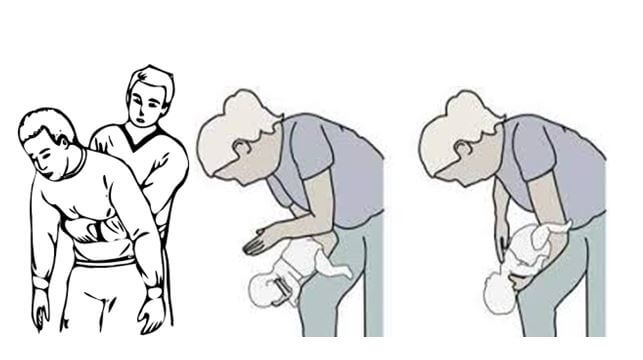 This procedure should be taught in all schools and colleges, to give first aid in a suspected Foreign Body aspiration

Two-day workshop on Equality, Diversity and Social Participation for Class I and Class II officers

Press Club in Association with The Art of...