Taha Uddin is the man behind the famous tweet of Nagpur Police on Lander Vikram which went viral in just a few hours.

Taha a 20-year-old Law student has been associated with Nagpur Police for their famous tweets from the last 2 years. Since then his work has been receiving a lot of love and response from the public.

Recently a tweet by Nagpur Police through their official tweeter account went viral as they shared their request to Lander Vikram which reads “Dear Vikram Please respond we are not going to challan you for breaking the signal”.

This tweet instantly grabbed the entire nation’s attention and everyone loved it.

Taha in an exclusive interview with The Live Nagpur informed that “It all began 2 years back when Priya Prakash Varrier made through the headline with her wink and based on that image I made a graphic design with a message ‘Nazar hati dur ghatna ghati’ which grabbed the attention of the then Commissioner of Police K. Venkateshan and since then I have been the supply chain for the tweets”. 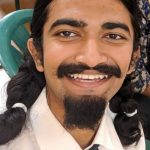 Taha has always been interested in art as his grandfather was an artist and had taught him many aspects of design.

Speaking about the work scenario he informed that “I have been coordinating with API Mane regarding the suggestions and requests for new tweets related to the trending topic. And on a historic day while everyone was waiting for the Chandrayaan-2’s landing on the lunar surface, the loss of communication between ISRO and Lander Vikram we decided to work on the topic and since the Motor Vehicle Act was recently implemented as well,  I decided to combine both and make the best”.

He said that “I was shocked to see the reaction of people as in just hours after posting the tweet it went viral on the internet”.

“Tweets are a way to connect to the youths as they are more into memes and social media and this has helped Nagpur Police in reaching the masses in a better way” he added.

Taha has been actively working on various other topics for Nagpur Police like #ShoLaw tweets, Nagpur police Dairies in order to connect with people and show the human side of Police in a funny way. Through these projects, Taha not only connects with the citizens but also gives a flavour of the day to day encounters of police personnel with dangerous situations.

Taha thanked Dr. Bhushan Kumar Upadhyay, Police Commissioner Nagpur along with DCP Shweta Khedkar, SB, Cyber, EOW Dr. Shrikant Komawar, Principal, and teachers of his Law College for their constant support and for always being an inspiration to him. He also thanked his mother and calls her as a dial 100 person who always helps him with the new content and design ideas.

Message for the artists of Nagpur city is to be confident on their work and be aware of the current affairs and other scenarios which help you to reach new heights.