BJP on Friday released its fourth list of seven candidates for the ensuring Maharashtra Assembly polls, with senior leaders like Eknath Khadse and cabinet minister Vinod Tawde missing from the list.

Eknath Khadse has earlier filed nomination from Muktainagar but the party has decided to field his daughter Rohini Khadse from the north Maharashtra constituency. Senior leader Vinod Tawde has also been replaced by Sunil Rane on Borivali seat. 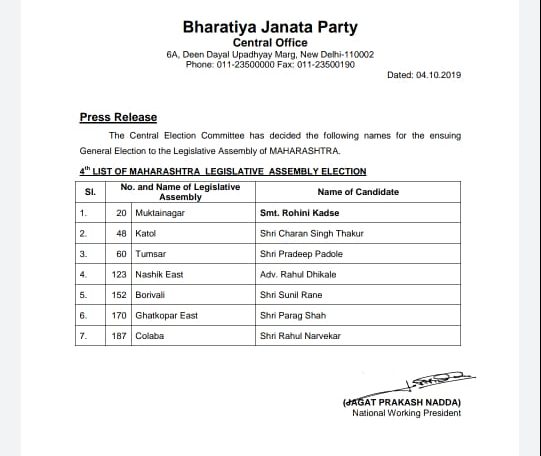 With its final list of 7 candidates it is now clear that BJP is fighting 26 more seats than its ally Shiv Sena, BJP will be contesting 150 seats and Shiv Sena will contest on 124 seats and other allies gets 14 seats as the total Assembly seat in Maharashtra is 288. The election will be conducted on October 21 while the counting of votes will take place on October 24 in Maharashtra.