Since the Central government has decided to charge train fares from the migrant workers the government has been on a constant hit by opposition and lambasted against this move.

Congress President Sonia Gandhi on Monday criticised the Centre’s decision to charge migrant workers for providing special trains amid the nationwide lockdown and said the party will pay for their train travel.

“The Indian National Congress has, therefore, taken a decision that every Pradesh Congress Committee shall bear the cost for the rail travel of every needy worker and migrant labourer and shall take necessary steps in this regard,” Gandhi said in a statement. “This will be the Indian National Congress’ humble contribution in service of our compatriots and to stand shoulder to shoulder in solidarity with them.” 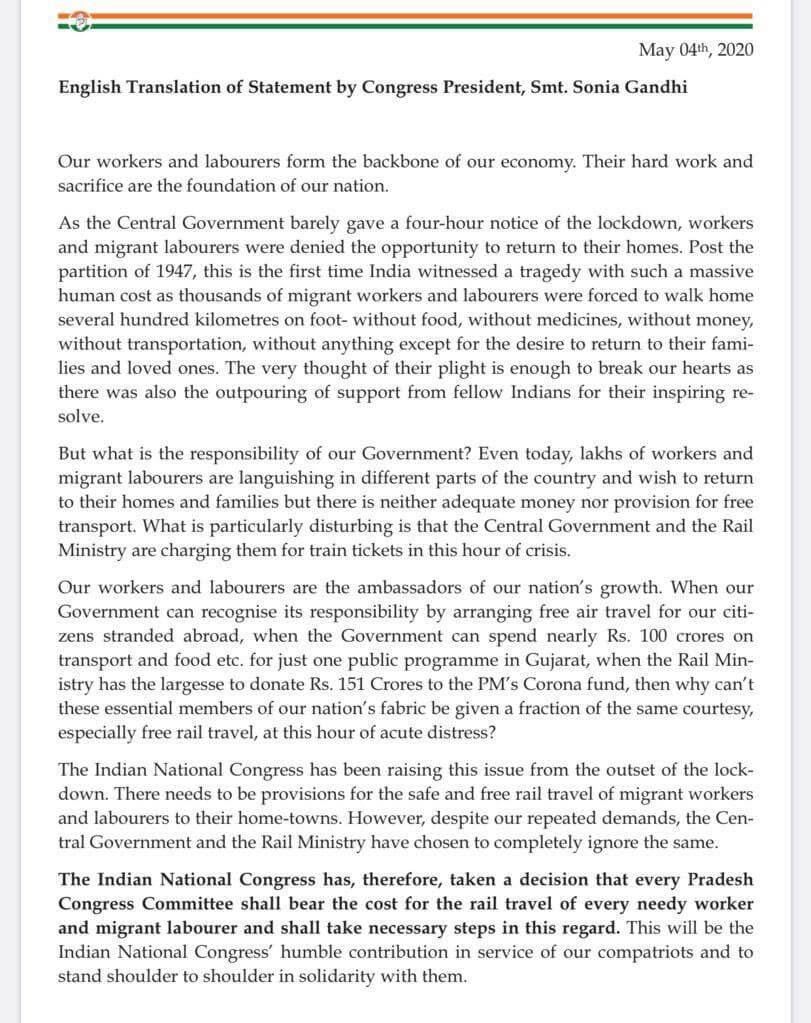 Post the partition of 1947, this is the first time India witnessed a tragedy with such a massive human cost as thousands of migrant workers and labourers were forced to walk home several hundred kilometers on foot – without food, without medicines, without money, without transportation, without anything except for the desire to return to their families and loved ones,” she added.

The Congress leader said it is “particularly disturbing” that the Centre and the railway ministry decided to make migrants pay the train fare during the crisis. An additional charge of Rs 50 per passenger will be collected, along with the sleeper class fare, in the special trains to be operated between the states.

Slamming the decision of the government she added that “When our government can recognise its responsibility by arranging free air travel for our citizens stranded abroad when the government can spend nearly Rs 100 crores on transport and food etc. for just one public programme in Gujarat when the Rail Ministry has the largesse to donate Rs 151 crores to the PM’s corona fund, then why can’t these essential members of our nation’s fabric be given a fraction of the same courtesy, especially free rail travel, at this hour of acute distress?”.

She said the centre and the railways’ ministry had chosen to completely ignore Congress’s repeated demands to help the migrants.