Bhonsala Military School, Nagpur has been for the past 20 years consistently observing the Kargil Vijay Diwas to pay tribute to the martyrs, as well as those who with their blood, sweat and grind brought glory to our nation.

Each year, six contingents of cadets along with a horse mounted column marched on the tunes of the pipe and drum band on a pre-designated route of city roads with an aim to co-opt the citizens in the celebrations. This was followed with an elaborate commemorative ceremony usually held in Dr Vasant Rao Deshpande Hall. 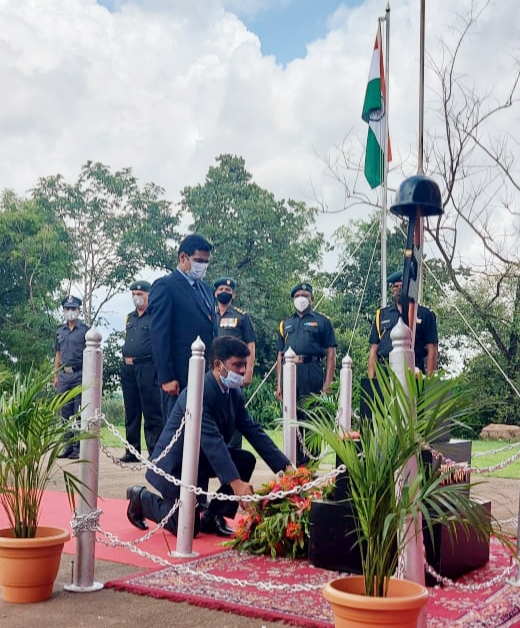 Here, the Chief Guest; generally a high ranking dignitary would be given a Guard of Honour followed by laying of wreath on the make shift War Memorial in full military fashion.This year, the 21st Anniversary of Kargil Vijay Diwas could not be celebrated with the customary style owing to the COVID-19 pandemic. However, no calamity has the power to shake the resolve of the school to remember those who in the summer of 1999 made the supreme sacrifice in service of our nation.

Hence, the school placed a huge billboard on busy Shankar Nagar square to remind the citizens to pay their tribute to the martyrs. Also, a solemn function was held in the school campus. Following all the prescribed precautions, the function started with recitation of school song followed by laying of wreath by Mr Ajay Shirke on behalf of the school including the management body in presence of academic staff along with military instructors and non-academic staff residing in the campus.We vow that next year, with blessings of the Almighty we shall once again celebrate this auspicious day in full gusto and fervor as before.