Maharashtra doctors have condemned Shiv Sena MP Sanjay Raut’s alleged remarks against the World Health Organisation (WHO) and the medical profession, though the politician denied the charges on Monday.In a chat on a television channel, Raut had reportedly commented on the WHO and raised questions on the doctors vis-a-vis compounders.

“The WHO is a useless organisation, because of which the Covid-19 pandemic came,” he allegedly said. Irked by the statements, the Maharashtra Association of Resident Doctors (MARD) protested while the Indian Medical Association-Maharashtra (IMA-M) on Sunday passed a resolution to condemn Raut’s alleged statements.The representatives of all the 216 IMA-M branches also demanded Raut’s apology to the entire medical community and withdrawal of his statements. 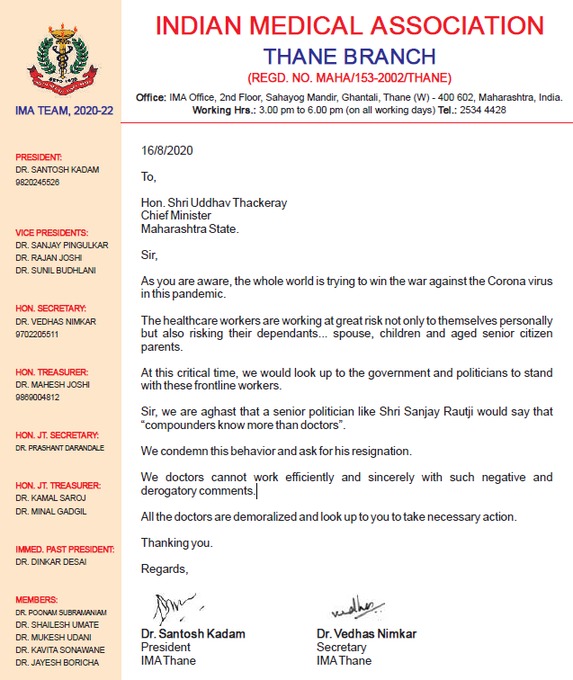 The IMA-M has also written to Vice-President M Venkaiah Naidu as Raut is a Rajya Sabha member, apart from Maharashtra Governor Bhagat Singh Koshyari and Chief Minister Uddhav Thackeray on the matter.However, Raut denied that he had hurt the sentiments of the medical fraternity and thus there was no need for him to say sorry.”I had said that doctors are such a powerful community and they have given us equally strong compounders. This is a matter of credit to them, and they should be rewarded for this,” said Raut.He maintained that without understanding the context of his statements, some people from a certain political party have taken to protests though he was criticising the WHO.

Raut pointed out that when Prime Minister Narendra Modi had criticised the Indian doctors in London, the medicos in the UK had protested, but none in India objected.IMA-M President Dr Avinash Bhondwe said that 300,000 doctors in the state are working incessantly during the coronavirus pandemic.”Such disparaging, disrespectful and dishonouring comments by a respectable leader, a journalist, and a Rajya Sabha member have hurt the feelings of doctors in Maharashtra. These slighting and uncomplimentary remarks have damaged the morale of the doctors who are fighting Covid-19 for more than four-and-a-half months now,” the IMA-M said.