The controversy surrounding Tanishqâ€™s latest ad for its brand â€˜Ekatvamâ€™ is refusing to die down, even after the ad has been withdrawn after heavy trolling on social media. The ad showcases a Hindu-Muslim couple celebrating the wifeâ€™s baby shower and presents a positive message of religious harmony. 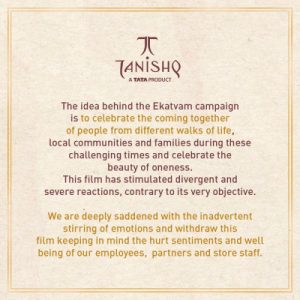 While netizens have been commenting on the silence of Ratan Tata, former Chairperson of Tata Group, in this matter, Tanishq issued a statement regarding the Ekatvam campaign, stating, â€œThe idea behind the Ekatvam campaign is to celebrate the coming together of people from different walks of life, local communities and families during these challenging times and celebrate the beauty of oneness. This film has stimulated divergent and severe reactions, contrary to its very objective.â€