Visvesvaraya National Institute of Technology, Nagpur celebrated its 18th Convocation, on December 28. Because of the ongoing pandemic, this convocation was held in a virtual mode. The event was telecast live, via a YouTube link, through the institute website and other social media websites like Twitter. 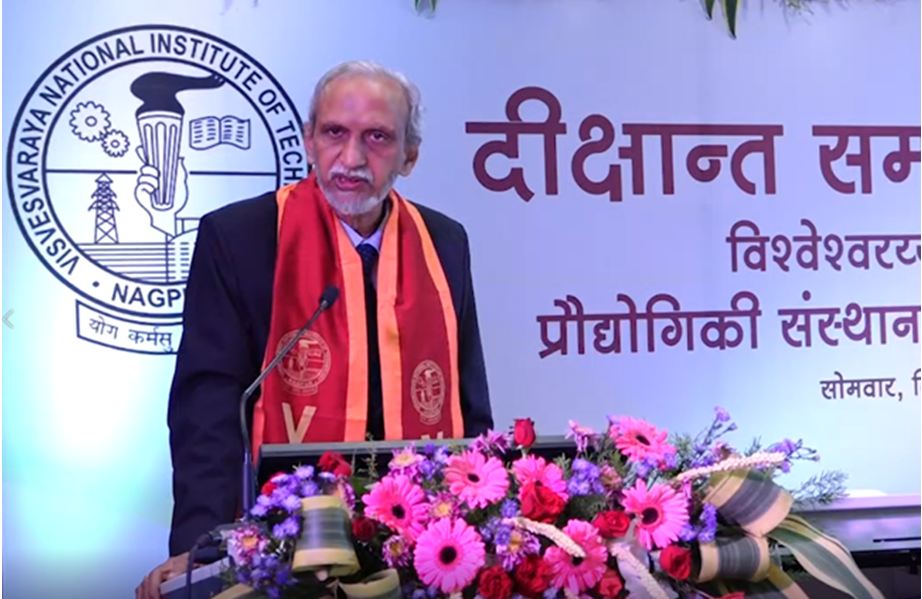 Prof. P. M. Padole, Chairman BoG, and Director VNIT, in his speech, presented the institute report. During his speech, he highlighted the institute’s achievements. He said that the institute believes strongly in Industry – Institute – Interaction, and has signed an MoU with many industries, including Dassault Aviation, the French Aircraft manufacturer for setting up a center of excellence & establish a curriculum of excellence, with Siemens, to set up a Center of Excellence (CoE) in the area of Industry 4.0 and AIIMS Nagpur to strengthen the various research areas in the field of medical engineering. He further added that, during the last year, the institute has bagged R&D projects from various organizations, worth Rs. 55 crores, a huge 185% jump over the previous year. Prof. Padole sought attention to the strong involvement and support of alumni in the institute development. He also highlighted the achievements of the various faculty members.

D. Patil, Sanjay Dhotre, and Dr. Pokhriyal addressed the convocation through a video message. D. Patil, while addressing the students, said that NOW is the time for them to pay the nation back what this country and the society has given them and helped them to reach this level. He reminded the students of their responsibilities namely, integrity and what is right for society and the country. He also appealed to the students, to ponder over what they owe to the institute for making them what they are today.

Sanjay Dhotre, during his speech, asked the students to remember the sacrifices made by the parents to see them reach this milestone. He further added that it’s time for the students to apply the concepts and ideas learned during their studies. The minister sought their attention to the fast-changing face of India in recent years. He appealed to the students to keep their values intact in this highly competitive world. 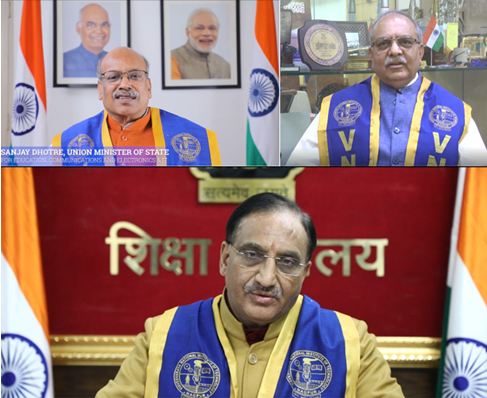 Dr. Ramesh Pokhriyal ‘Nishank’, the Chief Guest for the convocation, during his speech, congratulated the students and the parents. He talked about the 3Ds, the country has. The Democracy, Demographics, and Demand. He appealed to the students to use these 3Ds and help the country become ‘ATMANIRBHAR’ and attain a goal of 5 trillion dollar economy. He stressed upon the role of engineering in nation-building. He also informed about the various schemes such as Digital India, Start-up India, Make in India, etc. started by the Government of India. He urged the students to build the Naya Bharat – Swachha Bharat, Swastha Bharat, and Sashakt Bharat. The minister sought the attention of the students to some of the alumni of the institute, who have made immense contributions to society and the nation. Dr. Pokhriyal appreciated the work done by the institute during the corona pandemic.

During this 18th Convocation; VNIT awarded a total of 1134 degrees that included

This year VNIT felicitated students and research scholars with 45 medals, prizes, and awards for their academic meritorious achievements.

This year, the prestigious Sir Visvesvaraya Medal was given to Abdul Sattar Mohammad Ashraf Mapara, B. Tech. in Computer Science Engineering for securing the highest CGPA amongst all disciplines of B. Tech. programs. He also received Late Shri. N.G.Joshi prize, Late Dr. A. G. Paithankar Medal, and Late MahamahopadhyayPadmavibhushan Dr. V. V. Mirashi Medal. The Academic Excellence Prize and the Late Shri Parag Tijare Prize, both of which are given for highest CGPA in B. Tech., Computer Science Engineering was also bagged by him.

How the pandemic restricted New Year prayers in the city Churches?

International Blue Flag hoisted at 8 beaches across the Country.

CUET-UG exams to be held from August

RTMNU hikes fees by 20 per cent

Teachers with invalid TET certificate to be barred...

Work for moral based society and nation building:...