#savebharatvan : Moving towards a Policy change in the development of Urban Jungles

Bharat Van, an urban forest which has been a part of Nagpur city much before humans started settling here. A forest that slowly started shrinking due to urban developments, but still kept performing its most vital duty of giving us O2 to breath, protecting wildlife’s and a shelter to them. Many activities like illegal cutting of trees kept happening but the forest never complained. Now, did humans listen to its silent cries yet? The things that are available to us without a fight, we take them for granted, and sadly the same is happening with Bharatvan today!

This Forest despite giving much more then it is supposed to give, is again facing an event of extinction level. All aware people have already stood ground to fight against its extinction, but more soldiers are required, for this battle isn’t easy. For we are fighting against our own chosen one’s.  Urbanisation and modernisation has become so important for them that they are forgetting the reason for the fresh air they breathe every morning.

Fake promises made to plant more trees and sapling, has there been any data published for how much was done? A 70-80 year old tree will give 400-500 times more oxygen than a sapling, ever considered that before killing that tree? There are 500 such huge trees in Bharatvan which give this amount of oxygen.

Now opposing development is synonymous with siding with terrorism or having a soft corner for the dreaded naxals. Development is one of the most used political planks for elections and hence the one standing for development positions oneself as being a visionary.  Roads have become the flag bearers of development because roads quite literally are visible in black and white. So anyone who opposes a road risks being seen as anti development social element. So invisible powers can envision a road and lay it over almost anything under the definition of development. So one must pause and think what development really means.

Is development a visible process? most people would intuitively feel that yes development is a very visible process. It is associated with structures built out of concrete, tar and steel. So 10 years later if a space is filled with the concrete stuff, we would have definitely developed, isn’t it? 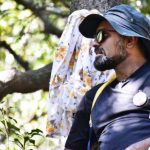 Cutting of trees for widening or laying of roads is a largely accepted sacrifice and there are laid down rules which allow cutting of trees for development if equivalent number of trees are planted elsewhere. it is another matter that what really happens to the replacement trees is hardly documented and no one is accountable if the trees don’t survive. Would demolishing an old building to make way for road also amount to development? Hmm quite likely. Afterall it is said to be an old building and afterall roads never do any bad. What if the old building were to be a Taj Mahal? Then the one asking this question is crazy because the Taj is irreplaceable for many reasons which need not be devolved into here. Taj Mahal itself is an epitome of developed architecture which cannot ever be duplicated.

Then why aren’t the 150 years old trees? if we were to plant trees today it is a slim chance they would survive enough to take root themselves let alone survive 150 years. 150 years ago was the year 1869. The same year our father of Nation was born. They have been witness to the changing fortunes of this country and during those 150 years i.e. every second since 1869, the great great grand dads…those trees have toiled hard to give us oxygen, ensure timely rains, shelter to hundreds of generations of the birds and may be respite from the hot sun to one of our forefathers. they are no less important than the man made Taj Mahal.

It is important to recognize that behind the garb of development comes the scheme of land grab. Road sides clear ways for grand buildings and the value of the land increases manifold. Land brings wealth, but to very few. So while you get the road, a politician or his relative gets the land. Think about it…who is driving the development and why?

Here’s some food for thought for everyone –

It is a humble request to the citizens of Nagpur to sign the petition and urge the authorities from taking such grievous decision.  Following is the link for the petition : https://tinyurl.com/y5nnpy5v