Good Constitution in the hands of bad people is bad – Dr. Rawal

The Constitution Day was celebrated with immense fervor and zeal at India Peace Centre, Nagpur. Renowned orators from central India enlightened the audience with their insights. Four orators enlightened the audience observing our constitution from different perspectives regarding the current political situation and the importance of Dr. Ambedkar. The program was moderated by Leona Moldenhauer and Leonie Kuehl. 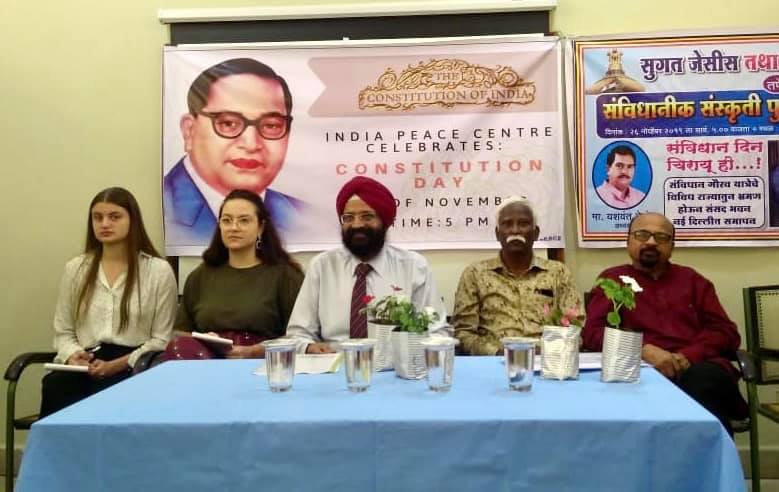 The Constitution can provide only the organs of State such as the Legislature, the Executive and the Judiciary. The factors on which the working of those organs of the State depend are the people and the political parties they will set up as their instruments to carry out their wishes and their politics.

Yeshwant Telang, a social worker and the national president of Sugat Jaycees, elaborated on the pivotal role of Babasaheb Ambedkar as the chairmen of the drafting committee. Telang underlined that every citizen should continue his legacy by working for social causes. As a renowned lawyer, Prakash Meghe spoke at length about the timeline of the constitution and the amendments it went through. He underlined that the amendments ought to be for the public and not for the ruling class alone. The lawyer brought to notice the recent abrogation of article 370 and spoke about the importance of fundamental rights. He very elaborately spoke about the challenges the constitution faces from the Executive.

Vira Sathidar, actor and magazine editor brought to notice that the nation is still in the making and B.R. Ambedkar’s dream has not been realized yet. He explained the Preamble of the constitution which is said to be the essence of the Constitution. Babasaheb dreamt of Justice- social, economic, and political and this, according to the speaker, could only be realized by a socialist economy. Sathidar took the audience to time travel at the debated and deliberations of the constituent assembly. His vision and efforts to emancipate the downtrodden were an inspiration for everyone.