About one and a half months back, when stepping out of home was still a challenge, India’s first-ever international medal-winning para cyclist Aditya Mehta alongside members of country’s para-cycling team began pedaling from Kashmir with a charity mission to raise money and create awareness about para-sports across India.

The expedition called Infinity Ride K2K 2020—a brain child of Aditya Mehta Foundation (AMF)—was a journey of 45 days beating chilly weather, riding bicycles through difficult terrain and amid challenging circumstances due to the pandemic, concluded with a 30-member team arriving at their final destination, Kanyakumari accomplishing 3842-km distance to reach the southernmost tip of the country. It passed through Nagpur on December 6, more than three weeks ago. 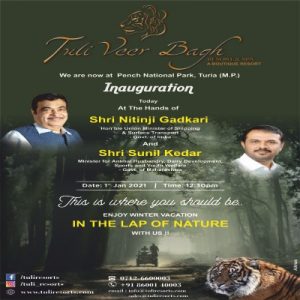 “I had cycled the same terrain all by myself six years ago in 2013 where I had faced immense challenges both mentally and physically but the love and support that I had received from everyone on my way back then gave me the confidence to start Aditya Mehta Foundation. And now after so many years of our initiatives, my strong 30-member riding team embarked on this difficult journey despite the severe challenges of the pandemic. We hope our awareness ride will encourage people to join and support our mission to find India’s best para sporting talents. We are glad that people have shown unconditional love towards us in our long journey. My aim is to groom champions so that they can play for India and become heroes,” Aditya Mehta, founder of Aditya Mehta Foundation, said.

After traversing 36 cities across the country, cyclists concluded their journey at historic Vivekananda Rock Memorial where they were welcomed by personnel of Defence and Central Armed Police Forces.

The sixth edition of Infinity Ride, which was flagged off on November 19 from Srinagar, saw cyclists interacting with several NGOs, specially-abled schools while connecting over virtual meetings and also met employees of an inclusive cafe chain to explain and empower people about para-sports and how it has changed their lives.

The Border Security Force (BSF) was the first organisation that believed in the cause from the very beginning and supported AMF and Infinity Ride since its inception in 2013 and later Central Armed Police Force (CAPF) also joined hands for this cause.

“I’m grateful to BSF for coming together to make this Infinity Ride possible. BSF has a special skill development centre and they are working with AMF to transform and train soldiers, who get injured while serving the country, to become para sporting champions. The AMF’s six years of partnership with BSF is going stronger over these years,” Mehta further added.

The Aditya Mehta Foundation has been relentlessly working with people with disability since its inception in 2013. The AMF raises funds through its signature fund-raising event, the Infinity Ride. The foundation envisions to scout para sporting talents and train them from grassroots to produce innumerable champions backed with the world-class facilities needed for para-sport athletes to excel in various sports.

The Infinity Ride K2K 2020 was led by Asian para-cycling championship bronze medallist Harinder Singh, Asian Games track cycling bronze medallist Gurlal Singh, both had lost limb at the frontline while defending the country at the borders. They were accompanied by the country’s only female para cyclist, Tanya Daga among others cyclists.

Covid-19 vaccine, Nagpur among 4 districts in state chosen for dry run on Jan 2