Ashok Dhar, the author of the book â€œKashmir as I see it: FROM WITHIN AND AFARâ€ was the invited speaker in the author-reader interaction series of the run-up events of the Vidarbha Literary Festival. The â€˜Meet the Authorâ€™ session was held in Chitnavis Centreâ€™s Mimosa Hall at 10. 30 am on a rainy Sunday afternoon recently.

The mood was both eager and somber. Eager to know what a displaced Kashmiri had to say about his homeland Kashmir and somber because Article 370 had recently been abrogated and the nationâ€™s attention had been focused by the media on the happenings in Kashmir post the abrogation.

Poonam Sarda introduced the mixed audience of students, adults, working professionals of Nagpur and also another young Kashmiri migrant, to the nature of the event. She stated that the objective of VLF was to provide Nagpurâ€™s readers with the chance to interact with current authors of non-fiction and understand their work through their dialogue with the audience, not just through their written word.

A writerâ€™s journey, as well as his work, is his way of sharing their accumulated experiences. Referring to Kashmir as â€˜â€¦ Yeh Gulistan Hamaraâ€™, she noted that the book was published just months before the Modi governmentâ€™s abrogation of Article 370; the book, therefore, becomes a valuable text in order to understand the current situation that the Kashmiris find themselves in.

The audience was all set to listen to a Kashmiri talk about his book, his identity as a Kashmiri and his journey as a writer telling us of a Kashmir as he sees it: from the inside from having been born and brought up in Kashmir, as well as from a now geographical distance, by dint of having had a professional career which took him out of Kashmir.

Most of the reading public of Nagpur was present to listen to a firsthand account of a man who will unravel the mystery of Kashmir, a land which was no less than heaven on Earth, famous for its multiple treasures and its ancient connection with the rest of India, and its recent violent history.

Ashok Dhar began by congratulating VLF on its initiative of launching a non- fiction literary festival. He began by introducing the various ways the people and culture of Kashmir were present in India through advertisement jingles like hukkus phukkus.. which is actually a Kashmiri lullaby. 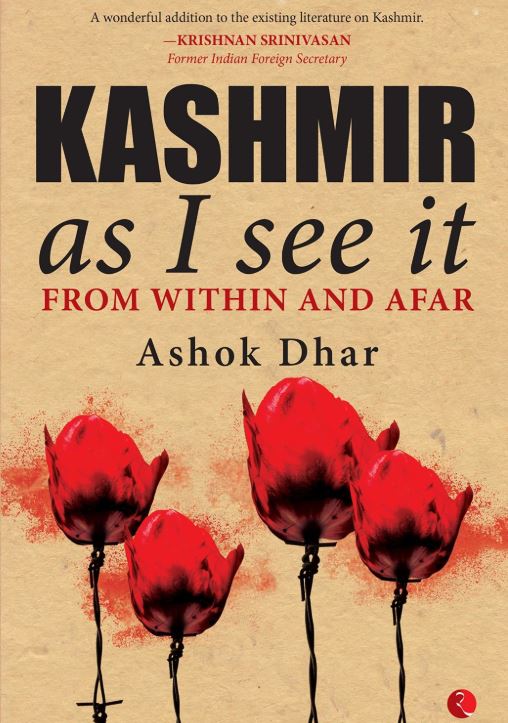 Ashok Dhar proceeded to detail his background, his reason for writing this book and the journey, which took him to libraries, universities, academicians, politicians, and historians who were, or already had worked on, writing about Kashmir. He focused on the fact that much of the recent literature available on Kashmir has been written as personal narratives of pain and trauma, of injustice and distortions of history. The writing, therefore, is opinionated and imbalanced.

In his book, he has strived to make it an impartial narrative, based on histories written as far back as 1586. The book has referenced and cross-referenced documented work, personal narratives and personal memories of displaced migrants in order to evolve a factual account of Kashmir as he sees it. Given the title, the audience expectation was heightened in anticipation of a present-day contextual reading of the political, social and cultural situation of Kashmir with reference also to his book and maybe reading some excerpts from his book.

He narrated the various personalities, which have peopled Kashmirâ€™s socio-cultural and political history especially when the problem turned international.

Dhar mentioned that Kashmirâ€™s history was written first by travelers as travelogues. The later historians did document facts, people and their work. He touched upon various historical names and their place in Kashmirâ€™s history: Carbon dating has revealed that Queen Yashomati was the first Queen of Kashmir, in 4000 BC. Dhar emphasized that authentic Kashmiri history should be sourced and no later interpolations are acceptable if any progress is to be made on the understanding of the Kashmir problem.

1947 may be termed as a crucial year for Kashmir. Dhar said that there are no dearth of writers on Kashmir and the more famous ones of late, is Rahul Pandita,â€ Our Moon Has Blood Clotsâ€, Ashish Kaul: â€œ Refugeeâ€ These are narratives are situated in pain and trauma and Dhar opines that his text is based only on factual history. His challenge was to keep personal trauma away from a purely historical perspective.

In his book, he has tried to center his discussion on 1947 and post 1947. What everyone is aware of, is only the tip of the iceberg. He also stated that we can only ignore true history at our own peril. He has coined an acronym for Kashmir: â€œLeLaMokshiâ€: which stands for Legality and Land and Mokshi, which stands not for the Sanskrit Moksha, but M for Morality, O for Operationality, K for Kashmiriyat, S for Sufism, H for Historicity and I for Identity.

Using game theory and referencing Dove Hawk Theory, Dhar explained to the audience, that the last chapters of his book give the readers a possible solution to the Kashmir crisis.

Dhar ended his talk by quoting the Kashmiri poet Shamas Faquir and expressing his wistfulness at needing public empathy that there might be a revival of Kashmiriyat through humane and soulful public interventions.

Get all the latest and current news Nagpur here. For an exclusive & live updates from the Nagpur, stay connected with THE LIVE NAGPUR

Shia Muslims engage in self-flagellation during a Muharram procession, at Mominapura in Nagpur today

Competitions for citizens, children on Selfie with Tiranga...

INIFD Students to showcase their designs at Designer...

City decks up in three colours to mark...

Collector appeals citizens not to use paper/plastic tricolours