As Bollywood’s romance king Shah Rukh Khan ringed in his 54th birthday on Saturday, several of his friends from the fraternity stormed the social media with their best wishes which are just dripping love.

Ayushmann Khurrana who is playing the role of a bald man in his upcoming release Bala’ extended his best wishes for the birthday boy and also expressed his excitement on playing a fan of the star who is seen imitating his style in the film. “Happy bday Shah sir @iamsrk Main #Bala film mein aapka fan bana hoon. I’d insisted on this. So the producer & the director incorporated it in the script Sapne dikhaane ke liye shukriya. Pyar mein vakeen dilaane ke liye shukriya Aapka jabra fan aur #SRKian , ” he tweeted 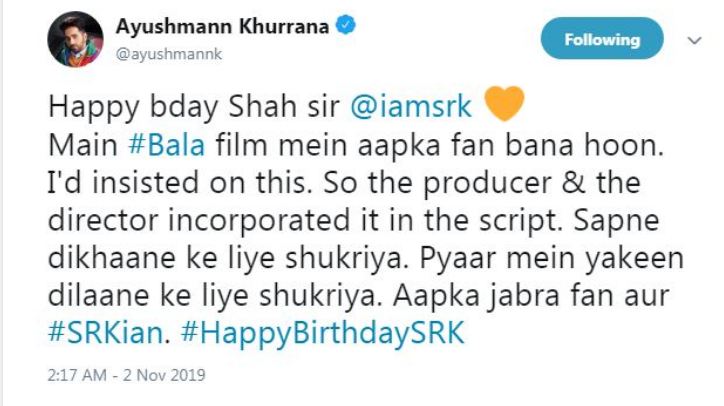 Ace filmmaker and choreographer Farah Khan who has worked with the mega star in films like ‘Om Shanti Om, ‘Kal Ho Na Ho ‘Kuch Kuch Hota Hai’ and many more shared a throwback picture with the star while wishing him. The picture which is from the sets of the film ‘Om Shanti Om’ where Shah Rukh Khan is dressed in a costume from the film while a young Farah can be seen posing with him crazily. “Happiest birthday @iamsrk.. the best Kings wear their crown on the heart.. not the head . n thats you,” she captioned the picture on Instagram. 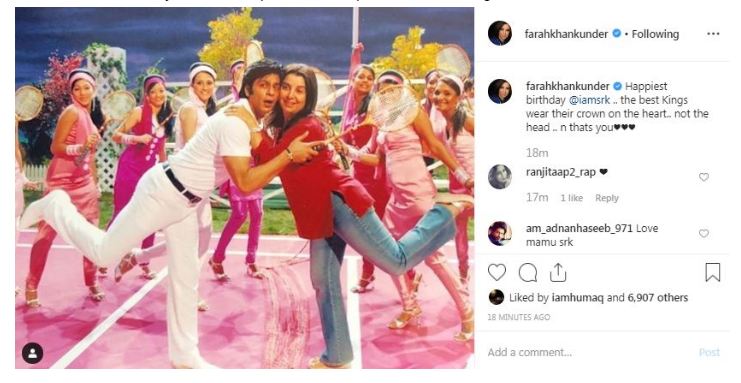 The star who is known for his witty remarks and jokes received wishes from Huma Qureshi as well. ” Happy Bday to the King @iamsrk Always witty, charming and charismatic !! Thank you for all the movies and memories!! No one like you sir !! Love, good health and happiness always,” she tweeted. Pouring in wishes for the superstar, Vicky Kaushal shared a monochrome picture with Shah Rukh which seems to be from an award function on his Instagram story and wrote, Happy Birthday Shah Rukh Khan.”

Bhushan Kumar, chairman and managing director of T-Series also wished the star with luck and success on the special day. “May this year add more feathers to your stack of achievements! Wishing you a very happy birthday @iamsrk” Bhushan tweeted.

Ace fashion designer Manish Malhotra who has known the birthday boy for 29 years poster beautiful from him on the special day. The designer shared a dapper picture of the star from a fashion show where he can be seen wearing a dhoti pant along with a long sherwani and wrote, “Happy birthday the #theoneandonly absolutely #fabulous @iamsrk lots of wishes.. know you now to 29 years and so many films / outdoors ..your warmth is the same and you have been just wonderful throughout.” 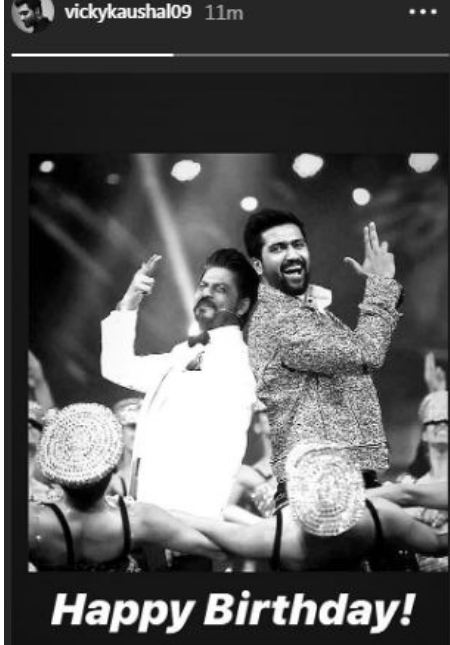 Apart from the above-mentioned stars, Preity Zinta, Vicky Kaushal and Ajay Devgn also extended the best wishes to the versatile actor. Meanwhile, the star recently grabbed the guest’s couch at David Letterman’s show on Netflix. Khan first revealed in May that he will be Letterman’s special guest on the new season which started airing on May 31 on Netflix this year. The exclusive interview was aired on October 25.

From Alia Bhatt-Ranveer Singh: All the guests who’ll...