Gear up for double dose of entertainment as Sony YAY! presents the first-ever movie of Paap-O-Meter franchise and a new show Krishna Balram

The festive season is just around the corner and kids across the country are eagerly waiting to kick-start the celebrations.Sony YAY!, the popular kids entertainment channel is set to light up the season with a double dose of friendship, adventure, and happiness through its two new offerings. For the first time ever Paap-O-Meter characters will have their own ghost comedy movie premiere with Paap-O-Meter Under Attack. The epic saga of Bhootlok will be followed by a brand new show based on mythological tales of an endearing friendship – Krishna Balram. 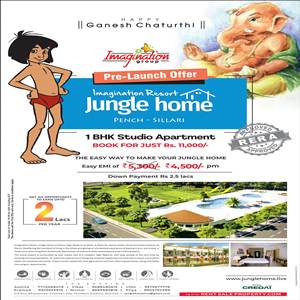 The first adventure will be brought to you byfriendly ghostsof Bhootlok who will star in a feature film for the first time with Paap-O-Meter Under Attack. The plot of this movie concocts a nail-biting sequence of events where Bhootiya Singh, an old rival of Bhoot Boss, seeks revenge on being kicked out of Bhootlok by Bhoot Boss ages ago. What follows nextis him hatching a plan to take over Bhootlok and Paapometer with the mission of instilling fearamongst earthlings. Who will prevail in this battle of good vs. evil?  Will Bhootiya Singh be the new Boss of Bhootlok? Watch out for the tele-movie premiere to witness your beloved ghost trio fight against this Paap.

The fun-fare doesn’t stop here,Sony YAY! reveals the historical narratives of an unbreakable bond between brothers with the showKrishna Balram. The mischievous & endearing Jodi of brothers will be seen playing innocuous pranks on gopis, stealing butter and engaging in heroic battles with demons. And that’s not all! Sony YAY! will also bring you a series of theircaptivating tales, depicting the life and journey of Lord Krishna in four engrossing movies – Krishna the Birth, Krishna MakhanChor, Krishna in Vrindavan and Krishna Kansa Vadh.

Tune-in to the funniest spook-fest of‘Paap-O-Meter Under Attack’ on 31st Aug at 12:00 PM while the mischievous heroes Krishna Balram will take over your TV sets starting 5th September every Saturday & Sunday at 5.30 PM only on Sony YAY!

“Getting Aashram was more of a gift from...

Capture the colour of life with Sony BRAVIA’s...