Ex-Chairman of UPSC  Deepak Gupta was the invited author at the 5th event of the Vidarbha Literary Festival on 9th November 2019. Mr. Gupta was speaking about his book “The Steel Frame: A History of the IAS”.

Anand Sarda was in conversation with Deepak Gupta, who engaged the author in a riveting discussion on the rich history of the Indian Administrative Services and what it means to be an IAS officer. Deepak Gupta traversed the journey of centuries from its birth in the mid-1800s to the IAS of present day dexterously.

The IAS officer has always been a source of intrigue and inspiration and the event gave its audience sneak-peak at the most coveted careers of the country. 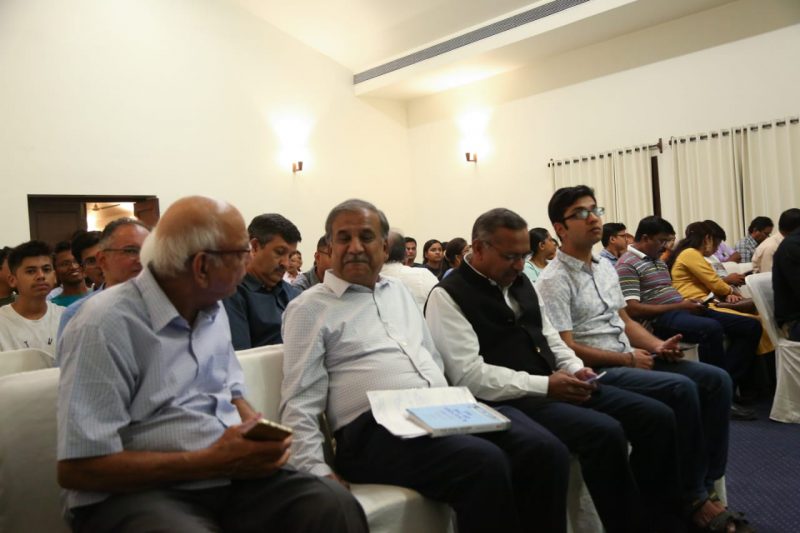 Talking about what inspired him to write the book, the author recounted the day he found the old marksheet of his Father who was a member of the IPS way back in the 1930s when he was organizing his father’s Birth Centennial. This acted as a tipping pointing and stirred him delve into various articles and books that spoke about the Civil Services in India and he realised that even after working with the IAS for so many years he didn’t have a complete picture of how the IAS became the institution that it is today.

This led him to write this book which he hopes will act as a motivator to the youth of India today who are aspiring for this much sought-after profession. While there are many books on the IAS he felt that there was a need in present times to showcase the IAS in an objective way with pride. 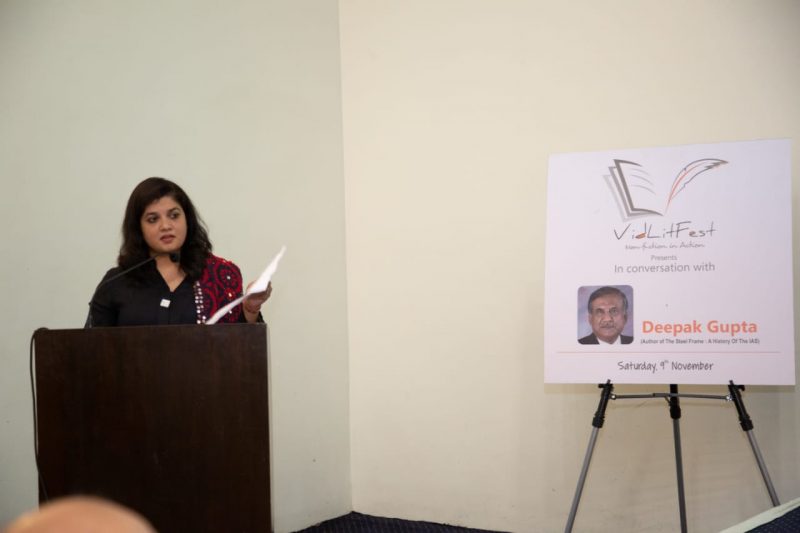 Discussing about the days of yore he discussed how the IAS, known as the Imperial Civil Services before independence, was formed in the chaotic times when the British were taking over the reins of the Indian Subcontinent from the East India Company. At that time, a great need was felt to have a system that would help the British to collect and maintain taxes in the subcontinent. He noted that in fact the ICS was the first Merit driven service in times when parliamentary seats were being bought. In time the ICS became the instrument of the British Raj and was modeled in other British colonies as well. While criticized today, Lord Macaulay was one of the individuals who shaped the formation of the ICS and who emphasized the importance of liberal education and make the services attractive to graduates from the universities of Oxford and Cambridge.

Referring to two stalwarts of Indian History Sardar Patel and Pandit Nehru, the author spoke about the contrasts in the thoughts of the shapers of modern India. He conferred that Sardar Patel had an immensely important role to play in making IAS what it is today. While a lot of the practices of the Imperial Civil Services continued to be adopted by the newly coined Indian Administrative Services Sardar Patel envisioned the IAS as an important pillar that would unite the nation. This was at a time when many of the provinces wanted provincial administrative services. Sardar Patel in an address to the 1 st Chief Ministers of the newly-independent nation said that the IAS and the IPS were necessary to hold the nation together and that they needed to be kept away from the local level politics. He believed that if centre controlled the recruitment and the disciplinary activities of the IAS the services would be the ring of protection around the constitution and uphold the country’s democracy as it would be free from any political interference.

Sardar Patel veritably wanted his secretaries to give him their honest opinion even if it was dissent. Thus, Sardar Patel thought that only a centrally governed IAS would be the Steel Frame of India as the ICS was of the British Empire. In contrast while Pandit Nehru was never very appreciative of the bureaucracy those bureaucrats who worked with Nehru in the first years of his Prime Ministership felt that his views were changing. 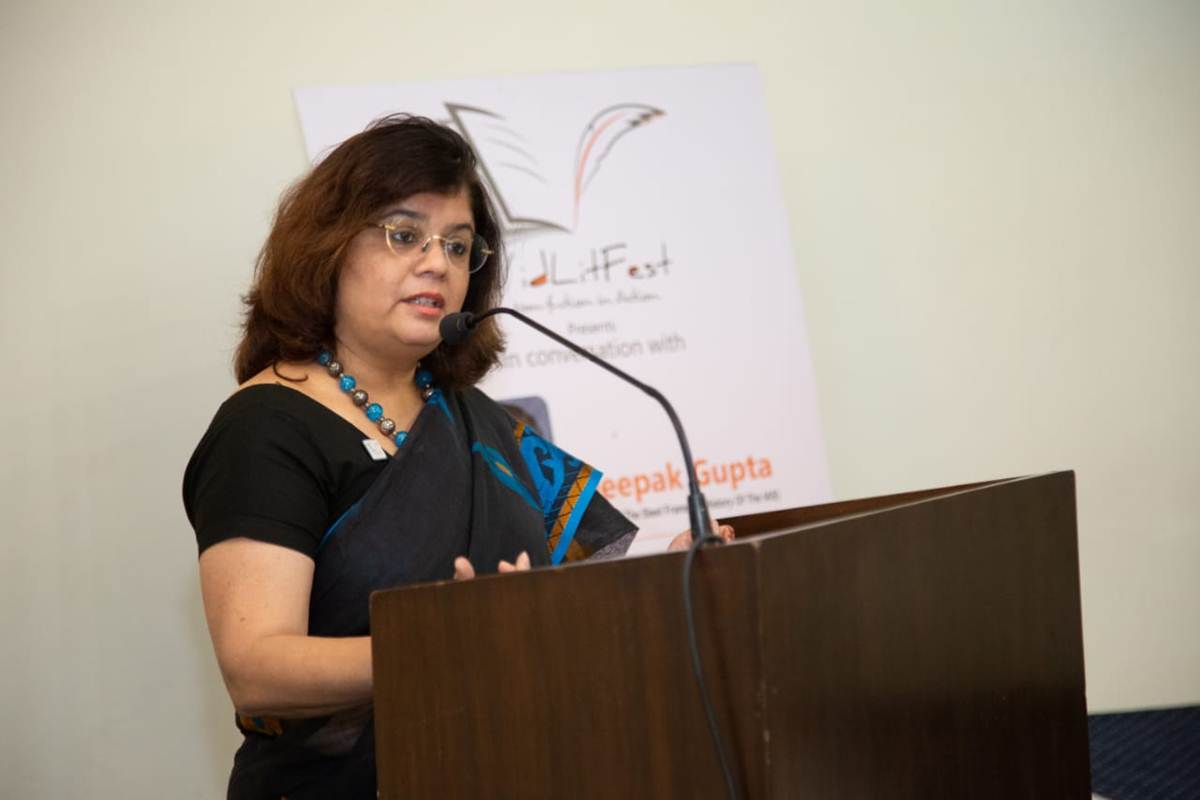 Answering on the relevance of the IAS in India today the author quoted world bank saying the IAS officers have a strong pool of skills and talents, networking opportunities, awareness of the socio-economic fabric of the nation and an overview of the government and hence the IAS will continue to play a strategic role in national integration and nation building.

As a recommendation to aspiring youths the author said that only those who have a penchant for public service should join the IAS. He felt that only with the purpose of serving the nation through public service will an aspirant be able to traverse the challenging assignments that come their way. As IAS officers they need to hold themselves at a higher standard. They cannot afford to have skeletons in their closets as they will be held against them. He urged them to do what is right and stand by it, do what you know in your heart is the right way. Further, he urged that the general public and media too have an equally important role as it is only through their support that honest officers can serve the nation justly. He urged them to side by the honest officers in times of unjust transfers by raising their voices and highlighting the injustice.

In an era of social media frenzy, it is very easy for us to get waylaid by attempts of prominence. But the author felt that in essence an IAS office should be anonymous. In an anecdote the author recounted the incident when he spearheaded the setting up of a gas bottling plant in Bihar in the 90s within a week of him getting to know about it when he found a letter that had been passed on from one place to another for six months. Even though it was noteworthy he did not seek any media attention for it then. 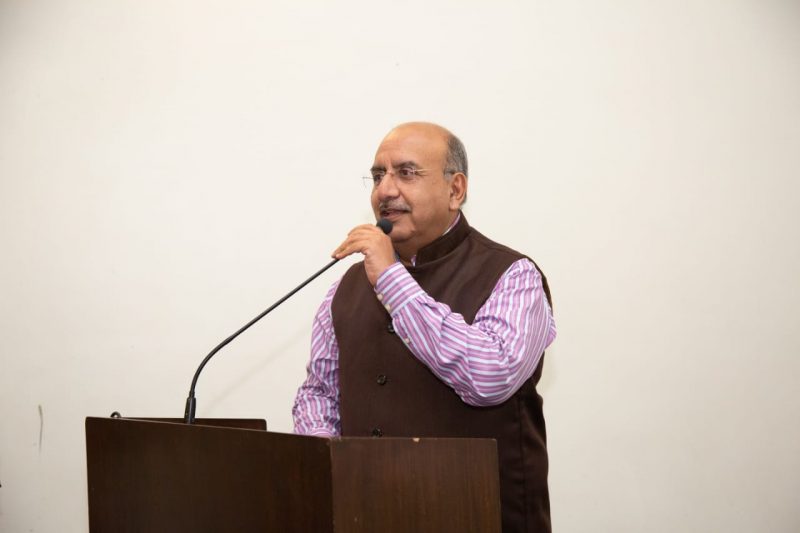 This enthralling conversation was followed by a round of audience interaction where the audience got to engage with the author and pick his brain on his thoughts on topics ranging from how an aspiring IAS Officer can deal with ethical dilemmas to how real are the sitcoms like “Yes, Minister” in depicting the role of IAS Officers.

Rajeev Agarwal gave an overview of the upcoming events which included the much-awaited writers workshop on 24 th November which would have Aditya Sundarshan as the resource person. The sixth run-up event to the Vidarbha Literary Festival will be held on 15 th December where the invited guest is renowned sports journalist and co-author of the book Yuvraj Singh: The Test of My Life and Indian Summers – Memoirs of John Wright. He also proposed the formal vote of thanks.

The programme proceedings were conducted by Medha Dixit. The opening remarks were given by Ruta Dharmadhikari who spoke eloquently about the importance of reading Non-fiction in our lives and the role Vidarbha Literary Festival is playing in placing Vidarbha on the literary map.