In a rise of pandemic of COVID-19 across the country and in the city joint Commissioner of Police, Ravindra Kadam has issued a letter stating various prohibitions against person trying to spread fake information regarding the virus.

The order stated under section 144 of criminal procedure code of 1973;

Based on the declaration issued by World Health Organization on April 11, 2020 characterizing the outbreak of COVID-19. Global pandemic subsequent notifications issued by Government of India and Government of Maharashtra under the Epidemic Diseases Act, 1897, it has been observed that there is widespread dissemination of fake news, Incorrect information misinformation and other such objectionable content in the form of messages, videos both edited and self-created image or memes (both edited and self-created), audio clips and other such forms of communication over internet messaging and social media platforms like WhatsApp, Twitter Facebook, Tiktok, Instagram etc… Such type of content has been found to have caused panic. confusion among the general public, inciting mistrust towards government functionaries and their actions taken to control the COVID-19 pandemic and also to have created animosity towards various communities.

WHEREAS it is considered expedient to issue prohibitory order for restricting any dissemination of Information through various messaging and social media platforms which is found to be incorrect, derogatory and discriminatory towards a particular community, distortion of facts, causing panic and confusion among the general public Inciting mistrust towards government functionaries and their actions taken in order to prevent spread of the COVID-19 virus and thereby causing danger to human health or safety or a disturbance of the public tranquility in the areas under the control of Commissioner of Police, Nagpur City.

I Ravindra Kadam, Jt. Commissioner of Police, Nagpur city video power conferred upon me u./sec 144 of the Criminal Procedure Code 1973(Act Ii of 1974) by Government of Maharashtra Notification Dated 01/04/1974 as Special Executive Magistrate and an authorised officer with a view to prevent danger to human health or safety or disturbance of the public tranquility, do hereby, promulgate an order under section 144 Cr.PC, in the areas under the control of Commissioner of Police, Nagpur City, Prohibiting any person or group of persons from: 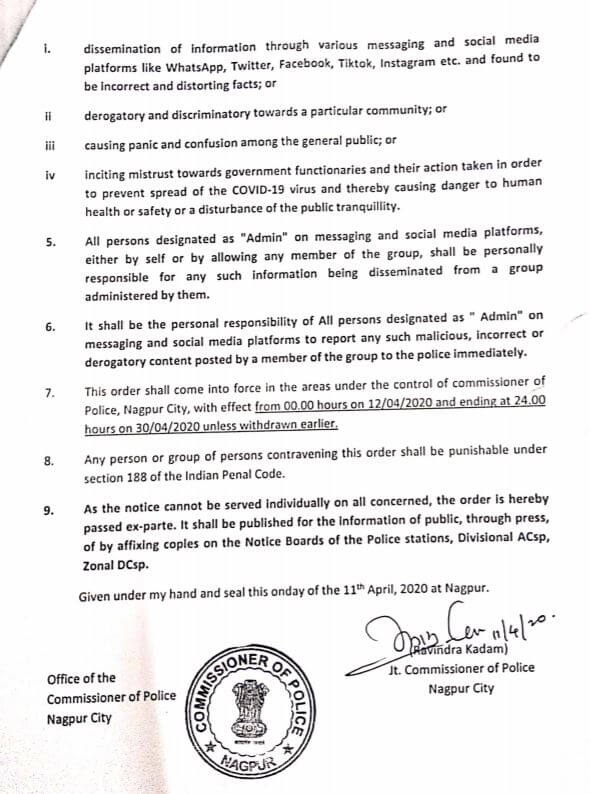