Centre Point School, Amravati Road Bypass witnessed a great shower of medals and certificate goes with the children winning accolades in the 22nd SQAY Martial Arts Association District Level Championship – 2019 that was recently held. The event was organized by the SQAY Association of Nagpur and was held at Centre Point School, Wardhaman Nagar.

Amongst 200 participants across the town, 8 from the U/11 category and 29 participants from CPS, AB in the U/17 and U/14 category held up a great show to marvel at. The blend of talent and swiftness in the performers left the audience awestruck. These young boys and girls have proved that they are capable enough to shoulder their responsibilities and make their school proud. 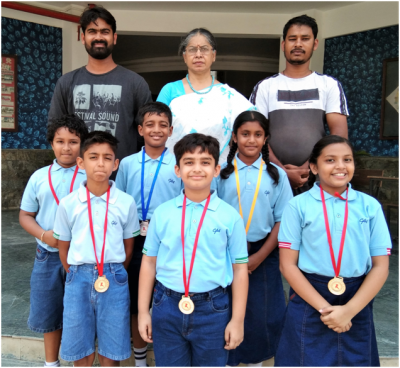 In the U/17 category, Manomay Goenka was awarded a Gold medal in the K1 &amp; group K1 event and a Silver medal in the Kata event. Ekta Metkar and Nakul Agrawal won Gold medals in the Fight event. Ariba Imran received a Gold medal for her commendable performance in the K1 event. Sarah Athar bagged a Silver medal in the K1 event. Parul Gondane won two Bronze medals in the K1 and Fight events. Rida Rehman earned a Bronze medal in the K1 Kata event. The chief coach Mazhar Khan and coaches Mehboob Ansari and Pritam Pinjarkar appreciated their disciples with great pride. The children extended gratitude to their parents, Principal Radhika Mehra, Vice- principals Perveen Cassad and Anita Sharma. The entire CPS family wished them success for the future events.

Students allege rules for Mop Up round for...